How are Nature Markets being discussed in the media?

The opportunity for markets to generate nature positive outcomes and shared prosperity is a fast-evolving topic that specialist and financial media are covering across many themes. 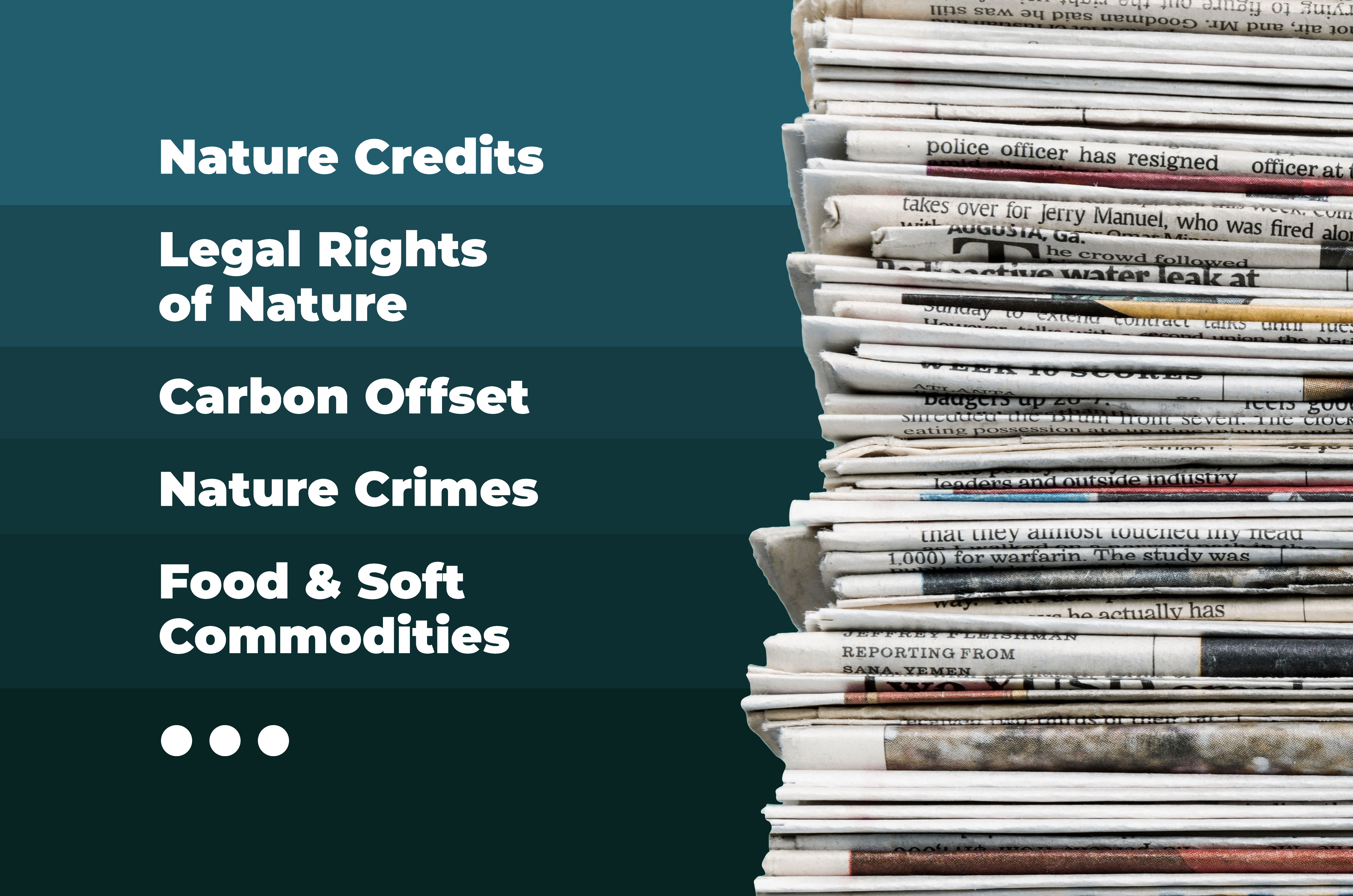 The ‘how and why’ of valuing nature is a topic that has spiralled out into the mainstream EU/US press, though the focus continues to be largely skewed towards forests. For example in 2022: ‘Can we save trees by putting a price on them?’(Reuters Foundation), ‘How much should a tree be worth?’(CBC - Canada) and ‘How our economy could become nature positive’ (World Economic Forum).

The financial risks of continuing to exploit and failing to value nature are gaining traction in the financial trades, for example in 2022 we’ve seen: ‘Banks need to connect climate and nature financial risks’ in The Banker, ‘Global asset managers taking no action to stop funding deforestation’ in Investment Week and ‘Need for biodiversity stress tests’ in Environmental Finance. The article ‘Forget the metaverse, the future is in the natureverse’ in Edie highlights that the global economy could lose as much as $2.7 trn a year by 2030 if countries continue to destroy biodiversity.

New innovative financial mechanisms to scale up nature-based investment are getting some coverage too, mostly in the specialist and finance press; for example a ‘$245-million initiative to create and maintain protected areas in Colombia’ (Mongabay).

New equity products with revenue streams from nature are also getting attention in the climate/nature/development press such as in June in Reuters Foundation and CarbonPulse and also some of the more forward-thinking financial trades, such as Investment Week.

The challenges around embedding equity in nature markets are covered too, for example, the lack of data (Responsible Investor and others) and too few investible products (Reuters).

The need to place indigenous and local communicates at the heart of solutions is getting some mileage, such as the Reuters Foundation long read on a court decision in Ecuador giving more rights to indigenous people, the Straits Times in Singapore and this month in Nation, speaking to the role of communities in Africa.

Coverage of specific natural resources being given legal rights is breaking through into a specialist and occasionally mainstream media.In May this year the decision by an high Indian court to grant nature equal legal status to humans was covered by Inside Climate News, The Wire and national media outlets while in June the decision of a US court to not grant legal person hood to Happy the elephant in a New York Zoo was covered widely including in the New York Times, The Guardian and Forbes.

The most recent in a string of countries enacting variations of rights of nature laws- including Ecuador and Panama, is the case of an ecosystem being given legal status this month in Spain, reported in Euro Weekly.

Legal person hood of nature continues to be discussed in niche media such as Inside Climate news, yes magazine and Non-Profit quarterly. An example of the issue being framed more in economic/financial terms can be found in a Forbes piece last year detailing the business implications of rights of nature.

Related to this area is coverage of new legislation to protect nature, such as the draft EU restoration law which received wide coverage, for example in Reuters and also in Al Jazeera.

Most coverage is concentrated in the specialist and financial trade press (ie. Titles like Responsible Investor and Mongabay), and overall this topic seems to have less coverage versus the higher-level debate around nature and finance – probably because it is still in the early stages of development and evolving.

Coverage includes specific examples of projects and case studies around new types of derivative financing mechanisms and systems (CarbonPulse) and (again) the high demand from finance but lack of supply (Carbon Pulse).

There is definitely interest in nature-linked bonds in the financial press of late including in Capital Monitor (part of the New Statesman Group). The financial trades have also covered product launches, such as the Jupiter global ecology bond fund in Citywire in February, and Family Forest Impact Foundation in Yahoo Finance.

This year LEAF, a ‘high-integrity platform for companies to buy emissions reductions credits to meet their net-zero commitments, while at the same time channelling billions of dollars into tropical countries to help them fight against deforestation’ has been widely covered in the tier one and business press, for example in Reuters, the New York Times and Fast Company.

There is much coverage of carbon offset markets across the mainstream media, financial trades, and of course in the specialist titles, much of which asks questions and points to a busy dialogue around the various challenges these face – for example around green washing, standards, transparency and human rights.

For example, fundamental issues with the overall concept of carbon offsets and queries around whether they will actually cut CO2 are covered by Politico, questions about standards and quality in Green biz, and concerns about transparency, in an ‘opaque and unregulated, market’, which is ‘falling short’ in the Financial Times.

Away from the US/EU press there are articles focusing on how important Voluntary Carbon Markets are for climate ambitions, including the Economic Times of India.

The term ‘nature crime’ is starting to gain traction beyond academic press. Interesting pieces around the destructive market practices embedded in current investment and market supply chains – including an FT piece titled ‘Pressure mounts on banks and investors over “nature crimes” ’and ‘Banks Flow Billions to Companies Involved in Rain forest Destruction’ in Bloomberg, so there is growing appetite in the tier one press when major companies are mentioned and there is robust supporting data or research.

In February 2022 there was also coverage in places such as Bloomberg and Project Syndicate of the F4B report exploring whether anti-money laundering laws could be used to reduce nature crimes.

Stories about soft commodity markets are still predominantly focused on conventional demand/supply/profit (for example, in Investors Chronicle), and of course the recent geopolitical turbulence (for example, ‘Mayhem in commodities markets’ in The Week.)

There is a broader dialogue on a general failure to recognise the value of nature in the economic system resulting from new research, such as the recent IPBES report (here in Business Green), but there is also coverage on the risks of the food system as it stands and actions finance can take to change the status quo (eg. in Environmental Finance).

The problems embedded with continued financing of nature destructive practices as part of commodity supply chains is also receiving attention, for example ‘Finance sector must be held accountable for role in deforestation’, in the FT.

An opinion piece in March this year from CDP run by Reuters Foundation argues that for companies, the potential financial impacts of water risks are over five times greater than the costs of addressing them.

The Guardian has been reporting on the effects of the nature loss crisis on our food systems. One article explains the role of the powerful food industry in creating our reliance on just a handful of food varieties – leaving these crops more vulnerable to the climate breakdown.

‍This increasing coverage reinforces the assertion made in the Taskforce on Nature Market’s White Paper, ‘The Future of Nature Markets’, that markets that explicitly value and trade nature, what we call ‘nature markets’, are on the rise.

Given the complexity and scale of global markets, there is little that can prevent this surge.

If developed appropriately, these new nature markets offer a unique opportunity to reset the historically unbalanced and unsustainable relationship between nature, the economy and communities.

It is the Taskforce’s mandate to address this, guided by a remarkable group of leaders drawn from policy, market, technology, civil society, and indigenous communities. They are supported by knowledge partners drawn from the financial, technology, scientific, policy and indigenous/stewardship communities. Click here to sign up to our mailing list and keep up to date with new releases, including the upcoming interim report.