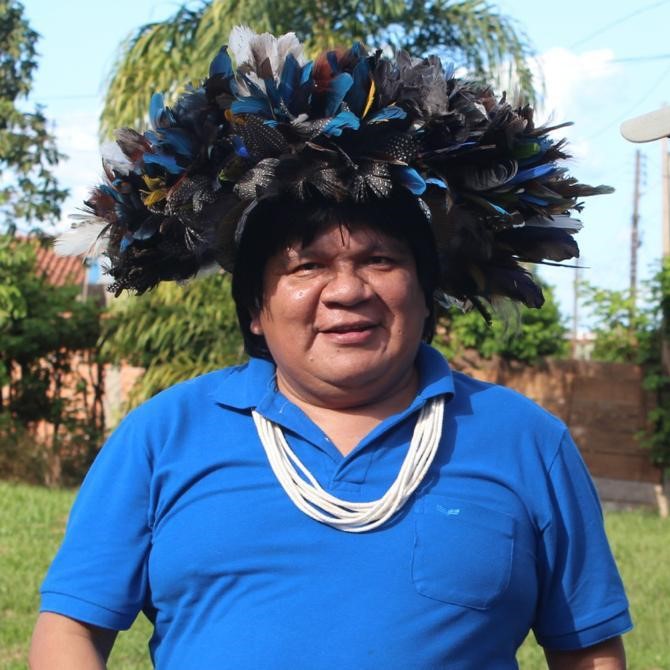 Leader of The Paiter Surui People

An environmentalist, political activist and tribal chief, Almir Narayamoga Surui, 37, has been fighting to save both his Surui tribe (pronounced SOO-ROO-EE) and the Amazon rainforest for more than 20 years. Almir’s efforts are credited with almost single-handedly bringing his tribe back from the brink of extinction. Most notably, his ability to bring his people and partners together in favor of finding solutions to making living forests worth more alive than dead has brought him recognition from around the world and in 2009 made him one of Brazil’s 100 most influential persons. As Almir told Smithsonian magazine in a March 2007 profile, “I rely on the spirit of the forest to protect me.” Chief Surui convinced the World Bank to re-structure a regional development program, ensuring that funds for the community should be distributed directly to the indigenous communities. He successfully lobbied the state government to build schools, wells and medical clinics for the Surui and other tribes in the rainforest preserves set aside for them. Chief Surui has joined with other tribal leaders to formulate a “50-year plan” to ensure the economic vitality of the region’s native inhabitants. Their plan encompasses a large-scale reforestation project for areas that have been affected by illegal logging as well as protection and alternative income plans. Additionally, Chief Almir is leading one of the first payments for Carbon Credits projects on indigenous lands in the Brazilian Amazon, uniting organizations from three different continents to bring this project to fruition.