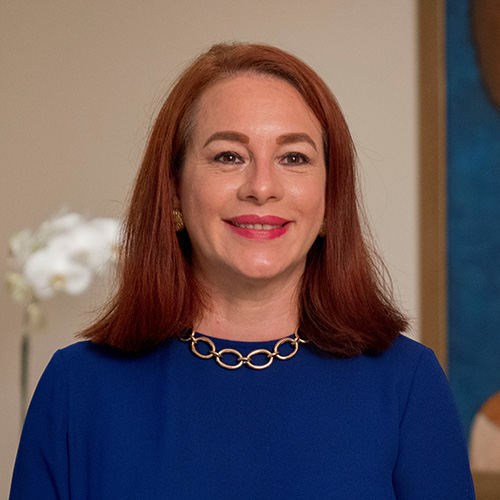 Maria Fernanda Espinosa is an Ecuadorian academic, diplomat, politician, poet and linguist with graduate studies in Amazonian Studies and Environmental Geography. In Ecuador, she served twice as Minister of Foreign Affairs (2007-2008 & 2017-2018), Minister of Defense (2012-2014) and Minister of Cultural and Natural Heritage (2009-2012). Ms. Espinosa was the first female ambassador and permanent representative of Ecuador to the United Nations offices in New York and Geneva. She was also Special Adviser to the President of the Constituent Assembly that drafted the Constitution of Ecuador in 2008 and Regional Director (South America) and Adviser on Biodiversity (Geneva) at the International Union for Conservation of Nature (2005). Her most recent appointment was to serve as President of the 73rd Session of the United Nations General Assembly (2018-2019), becoming the fourth woman in history and the first from Latin America and the Caribbean to be elected to preside this body since its foundation in 1945. Ms. Espinosa is a member of the Group of Women Leaders for Change and Inclusion, Commissioner and co-chair of The Lancet Commission on COVID-19, Councilor of the World Future Council, Member of the High-Level Advisory Council for the United Nations Alliance of Civilizations, co-chair of the Coalition for the UN We Need, Member of the Science Panel for the Amazon and a Fellow at the Robert Bosch Academy in Germany. She acts as a Goodwill Ambassador for the Latin American and Caribbean Fund for the Development of the Indigenous Peoples and the Common Home of Humanity.